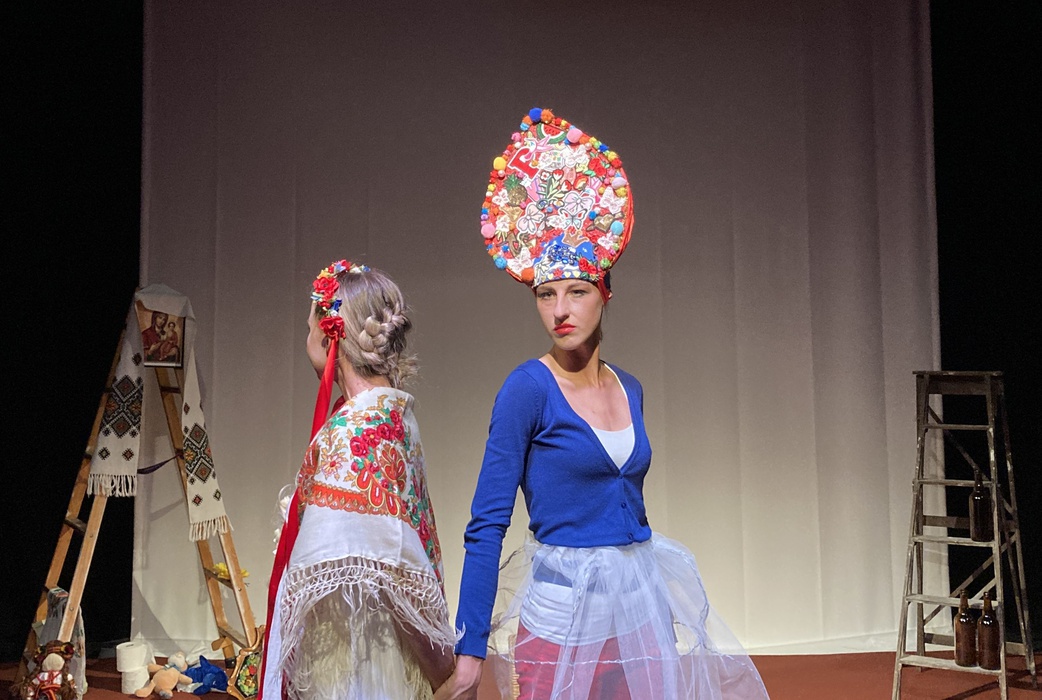 “For peace, for justice, for truth”. These words appear as the tagline to a new play at La Gleva Theater in the Farró district of Barcelona. The theater’s website describes the story as a chronicle of the struggle between imperialist machinery and the dignity of human life.

“My Name is Freedom” (in Catalan, “Em dic Llibertat”) is a play directed and choreographed by Ukrainian Yana Tereshchuk, first performed on May 17. Its host venue is a space for young and older artists, whether new to the scene or established, to create and perform original and different material that can both engage and challenge the views of its audiences. 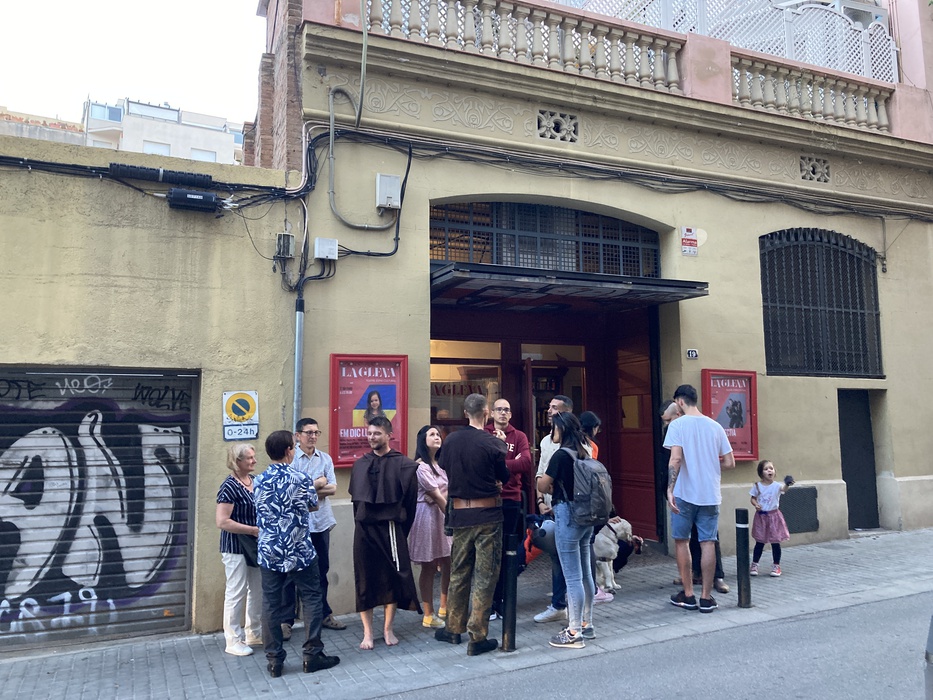 Tereshchuk travelled from Kyiv to Catalonia two months ago, where she now wants to talk about what’s happening in Ukraine, including to her family and especially her brother who is still fighting. For Tereshchuk, it’s important to convey Ukraine’s version of on-going events, as opposed to the mood music of Russia’s propaganda.

The play’s screenwriter is professional actress and writer Olena Romaniuk, who also plays the role of Ukraine. Fragile, in a snow-white dress, a bright wreath with red ribbons and a long braid, her character lives through and experiences the history of her people, from the ancient to the Soviet and right up to the present day, combining the pain of a nation with that of a singular human heart.

Before taking part in the play, Romaniuk addressed a large Barcelona rally on March 8 and made a speech about Ukraine as a woman who cries for her murdered children.

The play awakens the memory of a 2015 performance about the 1988 massacre at Halabja, Iraq, in which between 3,200 and 5,000 people died in a nerve agent attack. Produced by the Bergen Kurdish Student Society, the play took place in the fourth year of the Syrian war, in which Russia was on the side of the dictator Bashar Hafez al-Assad, and only a year after Russia attacked Ukraine and occupied Crimea.

At the time, Russian foreign affairs spokeswoman Maria Zakharova denied the existence of war crimes in Syria and Ukraine, instead enjoying complete impunity as the world stood silent. Artist Twana Ali adopted the role of a man trying to save a child and reimagining photo evidence of the chemical bombardment that has been etched into public consciousness.

Fast forward again to 2022. On the Barcelona stage playing the role of Russia is actress and designer Daria Tkachenko. She wears the colors of the enemy – a red “kokoshnik”, a white crinoline and a blue jacket. Tkachenko’s embodiment of a dysphoric, envious, dissatisfied and unsuccessful Russia is seen looking for ways to rob, enslave, destroy and even deny the existence of Ukraine. Tkachenko’s artistic statement is about the collective responsibility of Russians for the genocide of the Ukrainian people.

Actor Mykola Pashin first enters the stage as the Golden Horde, but then unites with Russia and becomes a soldier. Typical of the marauders we know from military videos and under the auspices of Russian control, Pashin’s character robs, rapes, kills, and proceeds to rake children’s toys and toilet paper into his bags. He rips jewellery off Ukrainian women which he can either present to his wife or sell on Avito.

In an especially strong scene, a drunken Russia, together with the soldier, are trying to read the “History of Ukraine” and understand nothing – neither the language nor the events of history.

The soul of the Ukrainian people, played by professional violinist and vocalist Lyubov Petlovana, is adorned with snow-white patterns. She sings, dances and plays her music, evoking a Ukrainian culture which was denied for centuries, destroyed and hushed up, yet now restored in spite of everything. 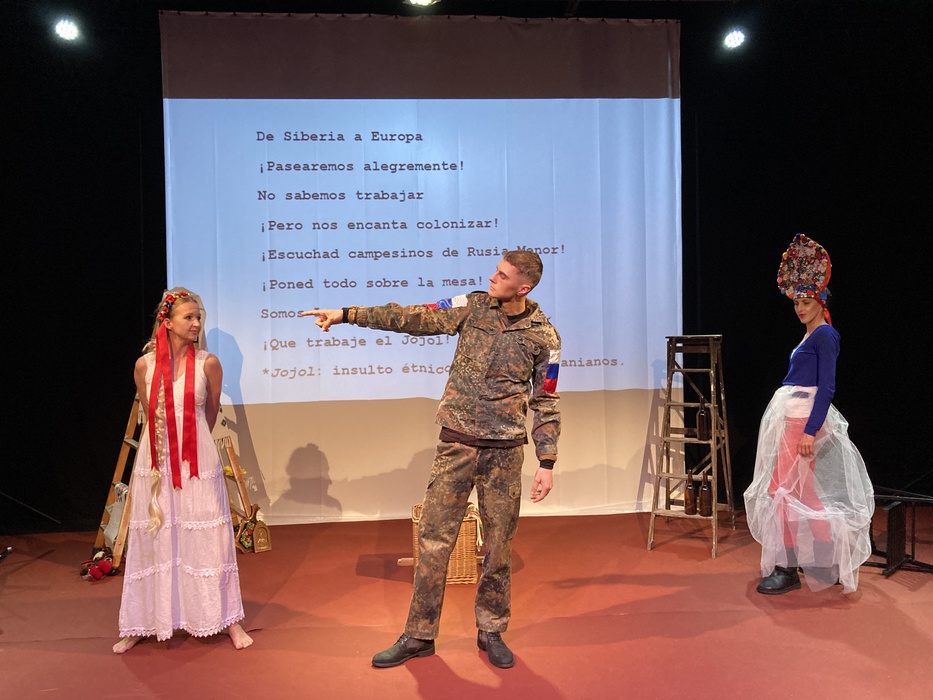 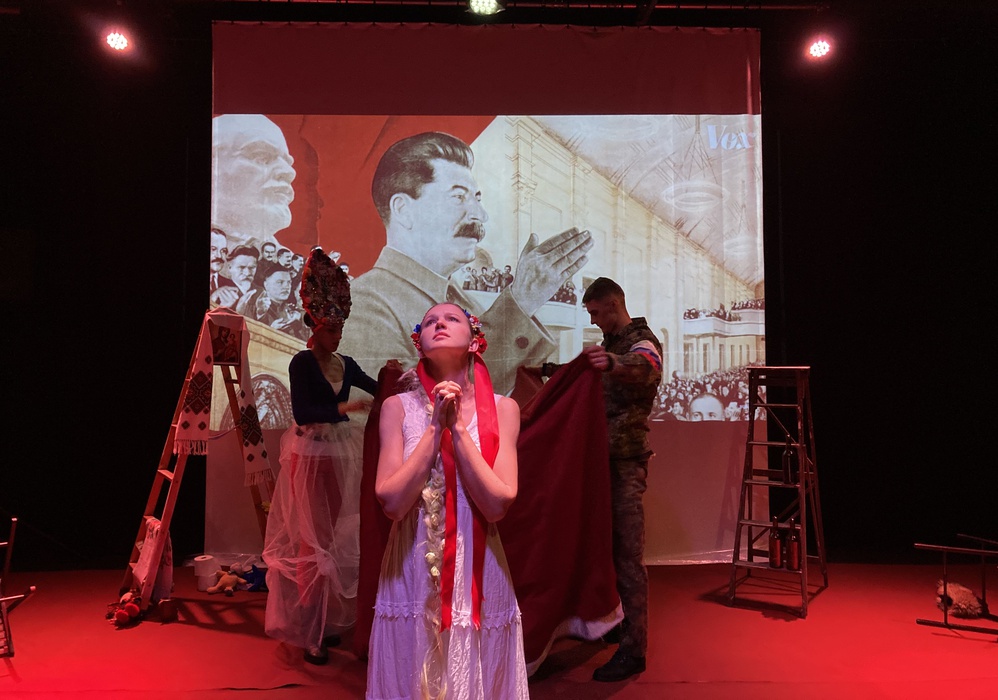 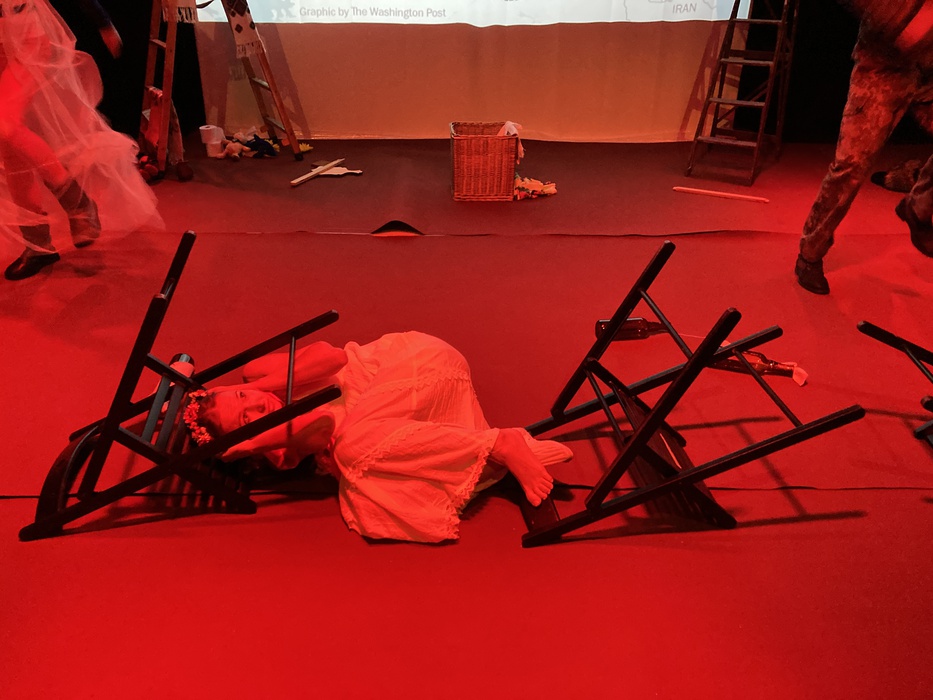 In the role of the narrator Nestor, is Ostap Petrushchak, dressed in monastic attire. He reads texts about the history of Ukraine and recalls important dates and names. It’s interesting to see Petrushchak in this role. For several months now, he’s been surrounded by journalists and talking about the latest events in the war and how to help Ukraine.

Both Pashin and Petrushchak held a week-long hunger strike on the Barcelona Maidan to draw the attention of the Catalans to Russia’s war against Ukraine and the wider world. The Maidan lasted a month, where some 30 activists spent days and nights on Catalunya Square, protesting non-stop and talking to passers-by about the latest news from Ukraine. The Barcelona Maidan is well known in Ukraine.

The smallest actress of the play, four-year-old Arina Vasylyk, also took part in the Maidan, singing the national anthem of Ukraine to the crowd.

Everything that has been said since the beginning of the war has taken on an artistic form, with the participants of “My Name is Freedom” moving from the protest square to the space of culture. Perhaps this will be more understandable for the locals — a simple story told by young and very talented Ukrainians.

The play uses both the Ukrainian and Russian languages, with translations appearing on screen. The performance is emotional and heart-rending as it depicts the realism of war with loud moments, strobe effects and some sense that make you want to close your eyes.

The performance is being repeated on Tuesdays at 20:00 and the running time is about 30 minutes. Book in advance since tickets are limited and there is a lot of interest.

Details about the play can be seen here